Battlesheet. You need to use one of these each game.

Playsheet. This has all you need for most of the game. 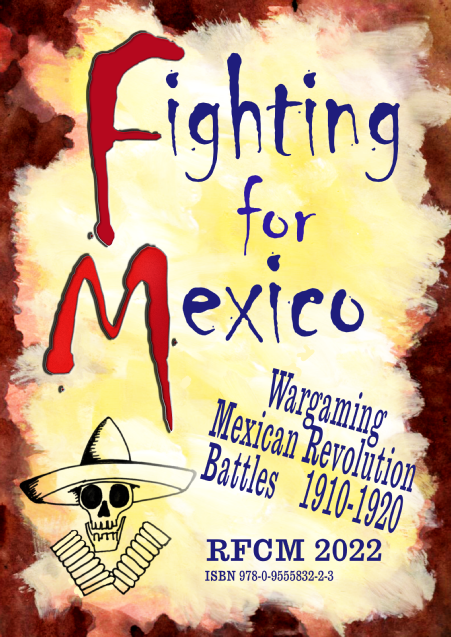 Period of Warfare covered
Peter Pig games always cover a narrow period in order to capture that period. Thus the most important aspects of that war can be modelled and
the less important ones piled into the general mechanisms. The Mexican revolution 1910 -1920

Associated Peter Pig range
Peter Pig always makes sure that the necessary stuff to play the game is available.
Range 11-MexRev. The PP WW2 and WW1 ranges have suitable items too.

Game scenario generator.
Piggy chase.
A “race/chase” using 1D6 each,over and over,  to reach 35. Stops if a 6 is scored , present horde lost. Unless banked before 6 score.

How much scenery needed
Peter Pig games use templates to represent scenery areas. The trees and houses are indicative, not literal.
5 of 6x12" templates per player. Players do get  choice over scenery piece types.

How many D6 needed
Peter games allow a bunch of D6 to be rolled in order to bell curve the outcomes
(i.e. results groups around the norm but extremes are possible).
15 D6 in total. Typically need 5D6 for shooting and 7 D6 for fights.

Measurement method
If measuring has to be very accurate, time is wasted and cheating/errors can occur.
Grid system. 6" squares. You could measure in multiples of 6" if grids are an anathema?

Basing convention
Peter Pig rules use 3x3 cm bases for most troop types. This size is tactile. has the same frontage when turned and allows figure formations to have depth as well as width. 3x3 cm bases for 2,3 or 4 figures. Base size is not imperative, because it is a grid system.

Typical army composition
Most PP games use about 100 figures a side. enough for PP to make some big sales and not too many to paint.
Typical per army= 4 Regiments  each of 11 bases. 3 MMGs. Pair of field guns.  General.

Number of army composition lists included
Narrow period focus allows "in war" diversity to be modelled.  A choice of 8 armies.

A.   Government first half

B.   Governmnet second half

Unit motivation mechanism
3 motivations per unit commander. He chooses 3 squares containing parts of his unit. Rolls a D6  and that is the squares action allowance.

With officer= owner re-rolls
In proximity= as it falls
More than proximity = roll, but opponent can demand a re-roll.

Action/moving mechanism
Something simple that can be memorised. PP rules give a move distance worth having.
Bases in a square can move together. Action point cost depends on scenery type.

Shooting mechanism
Shooting takes into account amount , skill and modifiers but ends up with a bunch of D6.  Saving roll gets both players engaged. 1D6 per base. Shooting can result in hammering target. Return shooting and opportunity shooting too.

Close assult mechanism
PP fight mechanism only consider about 7 modifiers. But these are the important ones for that period. another reason for keeping the period span small.
Then a pile of D6. 6 = kill. No saves. More decisive than shooting.

Game length
Most PP games last 5/6 turns. The games are always alternate move type, but with interaction via saves, reaction and opportunity. 2 Hours.
Countdown of 30. Players roll D6 with opportunity to re-roll. Deduct from countdown.

Book keeping
Usually a few numbers to write down at the beginning but nothing after that.
Most games have a battle/planning sheet available as a free download on the PP website.
None after pre-game.

Changes needed for 25mm gaming
15mm uses 6 inch squares. 25mm uses 8” squares.
No other change to the rules is needed, as all measure is made in terms of grid squares.
A  range of 2, is 2 squares at all scales and sizes of figures.

Best parts
Bits we really like about the game.

1. Assets for HE, trains, sneak movement, excellent leaders, shock assault, low morale, low ammunition, defences  etc. The asset system is brilliant fun.
2. Morale. Simple system that degrades a unit instead of destroying it.
3. No measuring, just get on and move, shoot, fight.
4. It's all in the one book.
5. Fortune favours the player who has a plan. Not the player that just reacts to the latest event.
6. Trains