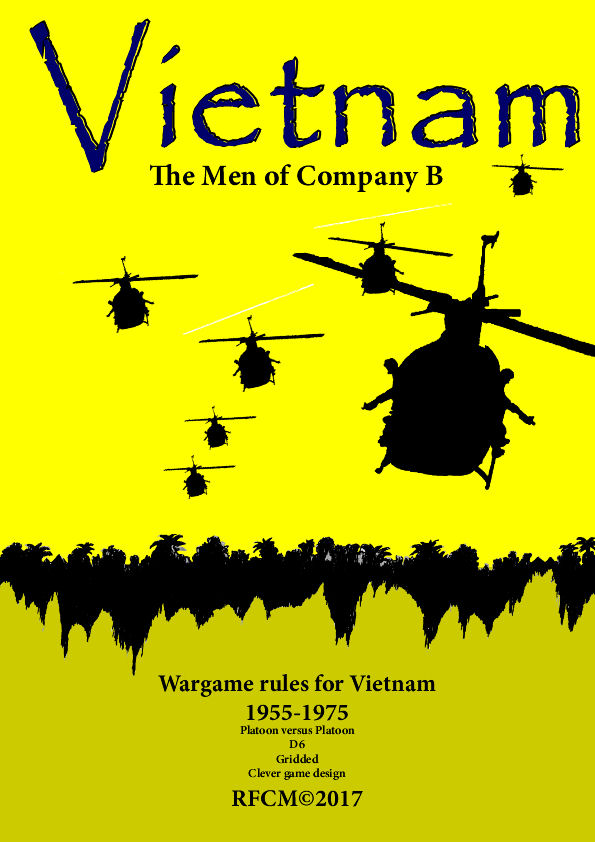 Period of Warfare covered
Peter Pig games always cover a narrow period in order to capture that period. Thus the most important aspects of that war can be modelled and the less important ones piled into the general mechanisms.
Vietnam from 1955 to 1975.  The rules cover the actions carried out throughout this war in Vietnam. This war was between the north and south parts of Vietnam and their political communist and capitalist allies. The VC and NVA are grouped under the heading “communist”.  The Australian, US and ARVN forces are grouped under the heading “white star”.

Game scenario generator.
Peter Pig games are never two equal sides "bashing it out".
The game allows the players to choose the scenario type. There is no pre-game.

Game table size
Peter pig games should fit on a normal living room table.
5 by 3 feet . The table needs to be marked out with dots to create a 6” grid.

How much scenery needed
Peter Pig games use templates to represent scenery areas. The trees and houses are indicative not literal.
Each player brings 10 scenery templates. Each template is 6x12" (i.e. two squares of the table). Scenery can be villages, jungle, bamboo, roads, paddy fields etc

How many D6 needed
Piggy  games allow a bunch of D6 to be rolled in order to bell curve the outcomes.
Results group around the norm but extremes are possible.
15D6 in total. Typically need 6D6 for actions and 7 D6 for fights.

Measurement method
If measuring has to be very accurate, time is wasted and cheating can occur.
Grid system. 6" squares. you could measure in multiples of 6" if grids are an anathema.

Basing convention
Peter Pig rules use 3x3 cm bases for most troop types. This size is tactile, has the same frontage when turned and allows figure formations to have depth as well as width.
Figures are based in pairs. Because formations are not important, the figures can be on 3x3 squares or coins. Base size is not imperative because it is a grid system.

Typical army composition
Most PP games use about 100 figures a side. enough for PP to make some big sales and not too many to paint.
Each player needs to provide about 50 figures. Additional figures are needed for the peasants.

Unit motivation mechanic
There must be a reason for the general to be where he is. His presence should make a difference.
Units within command distance (2 squares) are allowed more action D6.

Action/moving mechanism
Something simple that can be memorised. PP rules give a move distance worth having. Unit moves a single square for each successful action. e.g roll all D6 move 1 square, lose 1D6, choose next action, maybe another move?

If an action is failed the rest of the player’s turn is reduced to only 1D6 per unit.  This creates a decision for players about when to stop operating and when to be bold.

Shooting mechanism
Shooting takes into account amount , skill and modifiers but ends up with a bunch of D6. Saving roll gets both players engaged.
There is a D6 per base shooting. Less 2 bases on the count if raw. Thus the factors remain constant but the number of bases taking part is the variable.

Fighting mechanism
PP fight mechanism only has 2 modifiers.  But these are the important ones for that period. Another reason for keeping the period span small.
Assaults(fighting) are quick and decisive
Wiser players often opt to fall back in order to avoid close assaults.

Morale mechanism
Usual mechanic is 4,5,6= fails. 1 fail is not too bad. 3 fails is usually worse news. . A pile of D6.
Morale is only taken if enemy in proximity. This is because poor morale does not cause rout (there is nowhere to go) but causes more caution and inaction. Every fail cause the loss of an action D6.

Gme length
Most PP games last 6 turns. Vietnam has a 30 point countdown.
Each player removes 1,2, or 3 as he wishes. At zero the game is over. Reinforcements arrive at certain points on the countdown. Vehicles arrive at 25. Last squad arrives at 20 etc.

Book keeping
Usually a few numbers to write down at the beginning but nothing after that. Most games have a planning (battle) sheet available as a free download on the PP website.

Changes needed for 25mm gaming
Not all PP rules can be played with all figure sizes. usually the rules are written for 15mm.

Because the game uses squares as the unit of measurement the base sizes do not really matter that much.
What can change is the square size used within the grid.
10mm use smaller squares (4 inch)
15mm 6” squares.
18/20mm can use the same basing(6 inch squares).
25mm use a single figure  to replace a base in 15mm size.

Best parts
Bits we like about the game.
Action dice system. When do i stop and when should I risk it?
Ambushing with VC. 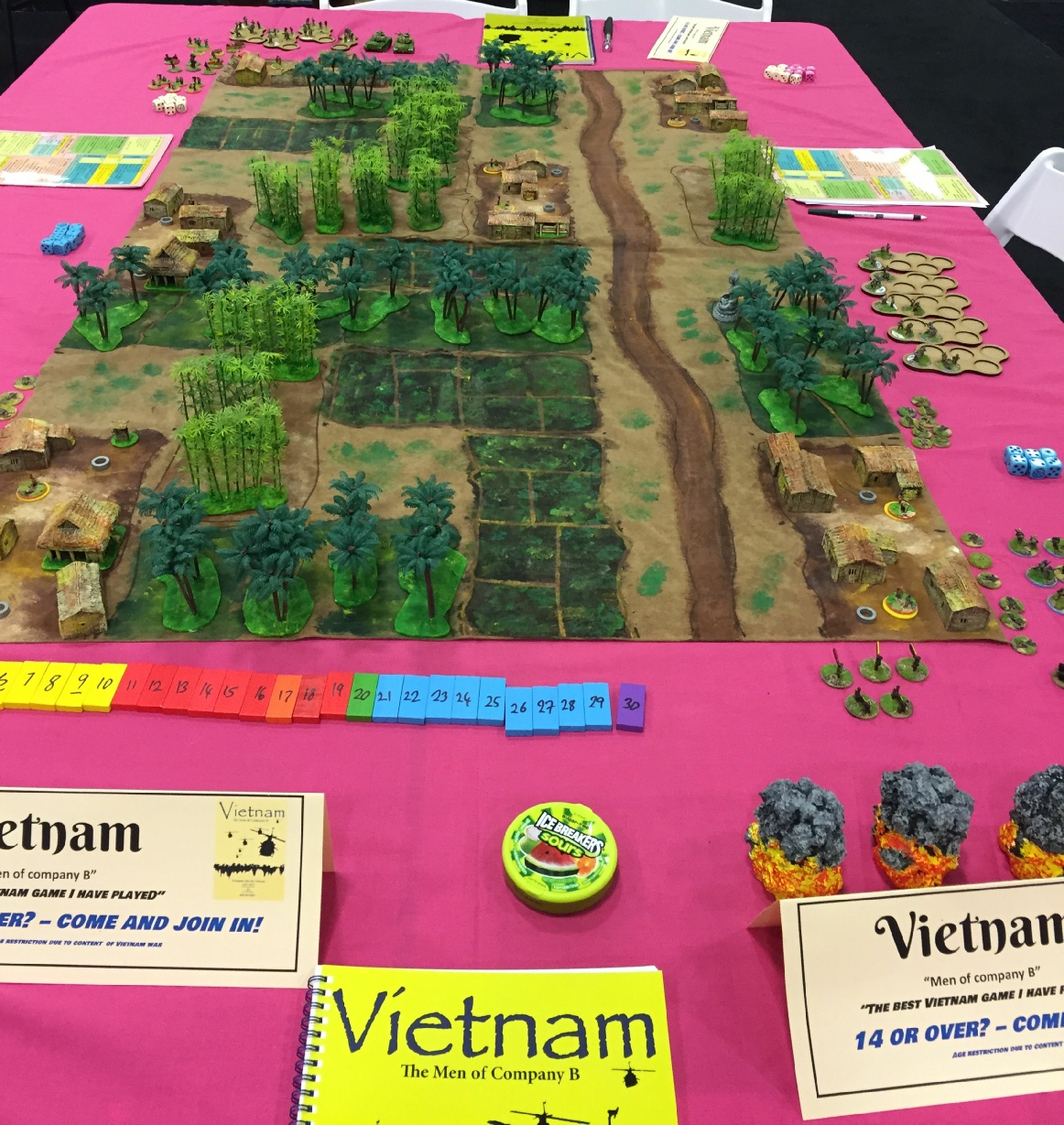